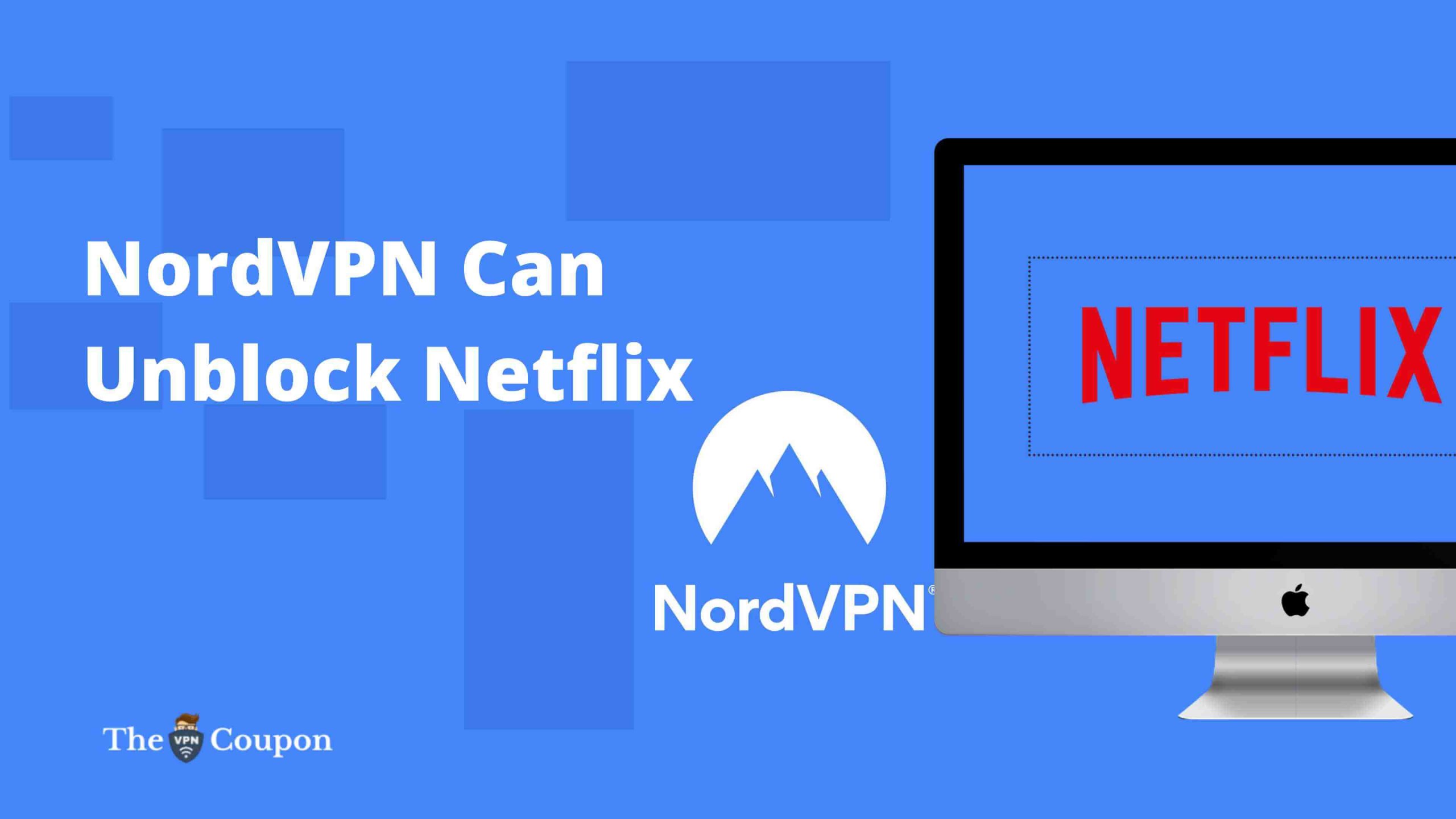 But the problem here is that we can’t use all VPNs to access the Netflix account because many VPNs provider does not have proper speed, encryption, or the server type and location to bypass the geoblocks restrictions of Netflix.

However, NordVPN has all these capabilities to bypass the geoblocks restrictions held by Netflix and much, much more capabilities.

What are Netflix Geo-Block Restrictions?

For example, content owners such as Marvels, Sony, etc. all need a separate licensing agreement for each territory where Netflix is available. And if they don’t have a separate licensing agreement for any region, then the content or the video episode wouldn’t be available in that region, and this is why popular streaming sites like Netflix block those contents in the other areas.

And why Netflix Block VPN Providers?

Like we mentioned above that the content owners need a separate licensing agreement for each territory where Netflix is available. And if those licensing agreements are not available, then the streaming providers are required to block content from being accessed in those regions.

And Netflix tries hard to eliminate the use of VPNs by consistently blocking the IP range of VPN providers because with using these services, anyone could bypass those restrictions and watch geo-blocked content.

Companies like Netflix compare the IP address of visitors in their well-known database of VPN servers, and if they find that the client is using a VPN service, they instantly block access to their website.

They detect the range of VPN servers and save them in their database. Thus most of the VPN providers have to change the IP address of their servers to unblock those restrictions.

But how Netflix and other streaming providers detect the VPN?

Okay, so you can use the below scenario to learn more about how these steaming providers detect and block the VPN providers.

Let assume that you’re using a VPN provider to connect to Netflix, and you’ve assigned the 123.123.123.123 IP address. Same time if the other client of the same VPN provider is also using the same IP address to use Netflix, then Netflix detects that two people are using different Netflix account at the same time.

This can’t be possible in general, or this can’t be a coincidence. So they assume that you’re using a VPN provider to bypass the geoblocks, and then they block the range of 123.123.123.123 IP address.

If you try to access Netflix using a free VPN provider, you’ll get the error in your Netflix video player.

And by any chance, if you access the Netflix with free VPN services, then you’ll never get the streaming speed because free VPNs have a limited number of server and IP range and limited speed.

But instead of using free VPN services, you can try some of the paid VPN providers who offer a wide range of IPs and Servers to access Netflix and other popular streaming sites with unbelievable fast and encrypted service. Some of them can include NordVPN, ExpressVPN, and IPVanish.

Trending
How to Fix Torrent Not Downloading? and What’s the Reason?
Top

Why Choose NordVPN for Unblocking Netflix?

Where NordVPN has more than 5,186+ servers in 59 countries, and it is an ever-growing VPN provider that increases their servers continuously. This gives NordVPN thousands of IP addresses through which it transfers your data and accesses the geo-blocked content.

Apart from the enormous number of server location types, NordVPN runs obfuscated servers. These servers can play a vital role in hiding and encrypting the data. Netflix cannot distinguish the data is from everyday data or VPN, meaning fewer of NordVPN’s IP addresses get blacklisted.

Well, accessing Netflix using NordVPN is easy. You just have to download the NordVPN app on your device and connect to any VPN servers near you (You can check the working servers for Netflix here) to access the Netflix account.

First of all, you’ve to purchase the NordVPN app to access Netflix (You can follow this guide to activate your free 30-days NordVPN trial), and if you already have a NordVPN account, then move to the next step.

Now download the NordVPN app for your device from this page and install it in your device, or if you’ve already downloaded and installed the application, then move to the next step. 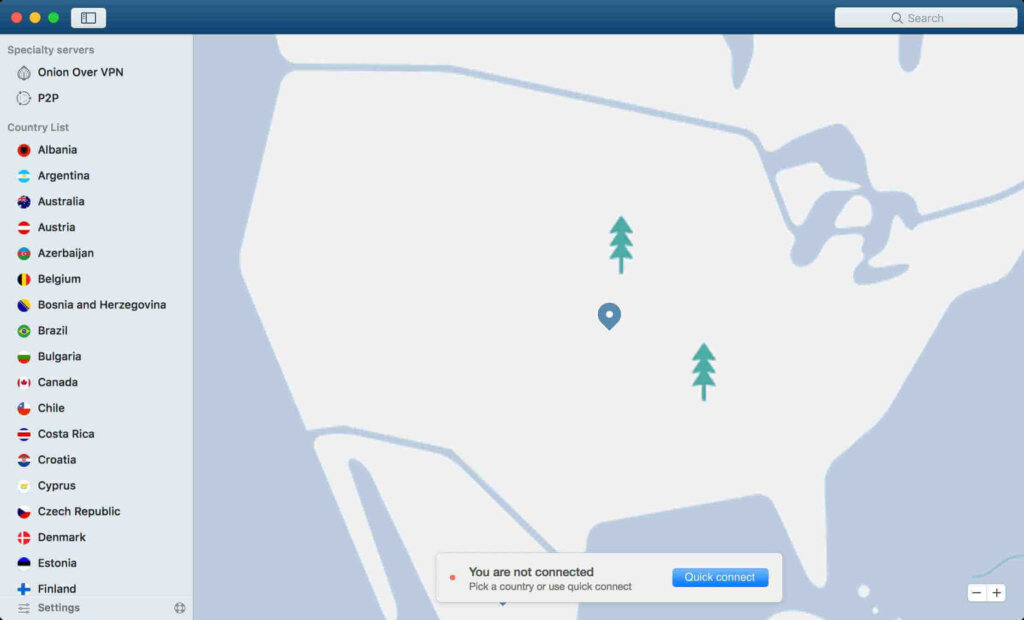 Once you installed the application, open it, and it looks similar to the above image. Now you can choose any closest location from the map, or even you can click on the “Quick Connect” button to instantly connect to any fastest NordVPN server instantly. 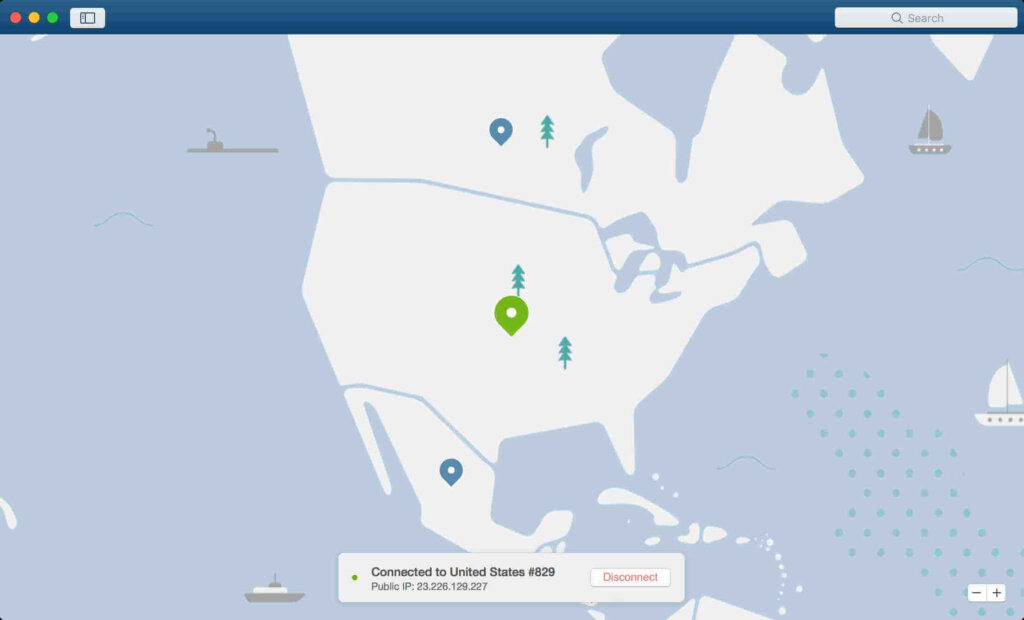 To select the server, click on any “Server Location” from the list and click on the “Connect” button. Here in this example, I’m connecting with the “United States” server. You can choose any server region.

Now you’re successfully connected to the NordVPN server, and your data is now served in encrypted form. 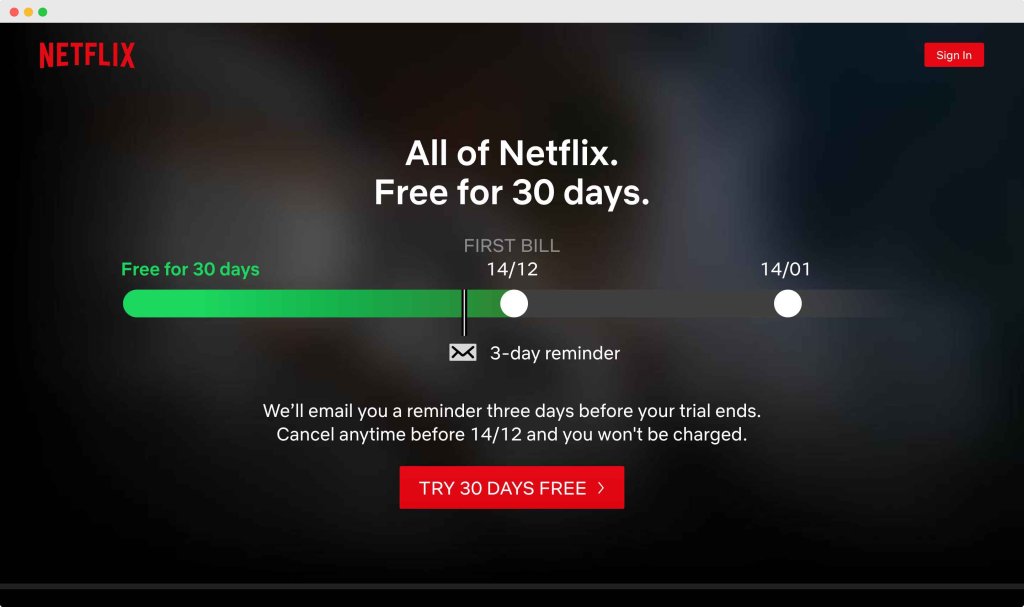 Once you’re connected to the NordVPN server, open the “Netflix app” or enter https://netflix.com in the address bar of the browser to open the Netflix web page.

Trending
What Are Some Great Uses for a Virtual Private Network? 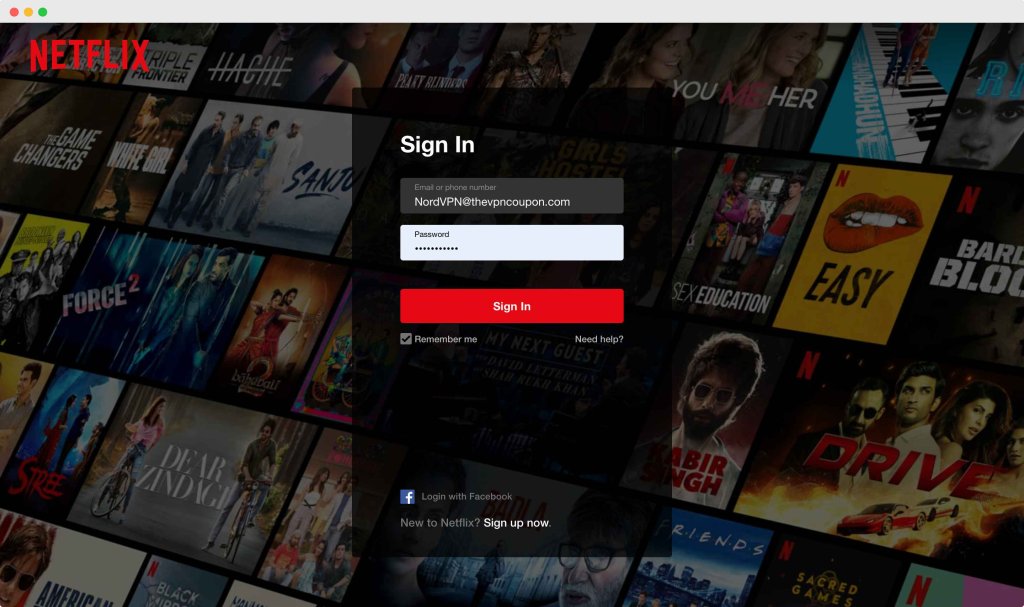 Note: If you’re using a “Free VPN Provider” or a VPN plan with a limited range of IP addresses, which is already in the Netflix VPN database, then it will show “Netflix Site Error” on the “Sign In” page (Check below image). 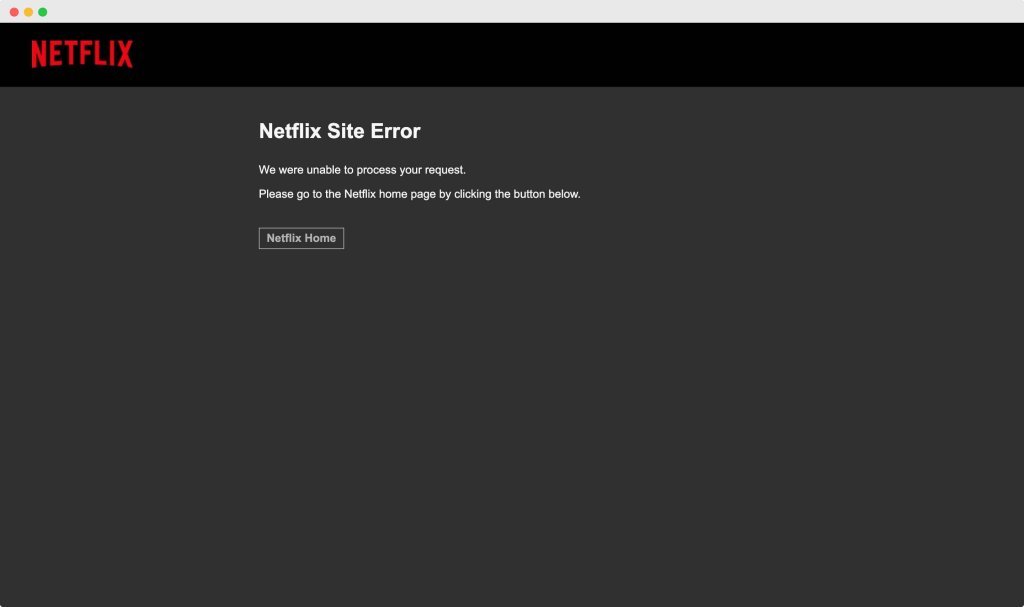 If this issue also shows if you’re using NordVPN, then I would recommend changing the NordVPN server to any other region or server IP address.

After a successful login, it will redirect you to the Netflix homepage. Now you can access any television shows or content which is licensed in the United States region with ease (Click here to view our NordVPN speed test result).

Can NordVPN unblock Netflix from Abroad?

NordVPN not only allows you to unblock Netflix in the “United States” region, but you can access it anywhere from the World where Netflix is available.

You can connect to any NordVPN servers from the list to open Netflix. It can be either ‘United States,” “Japan,” “Canada,” etc. Let me know in the comment section below if it works in your country.

If you’re not sure if NordVPN works to unblock the geo-blocked content in Netflix, then you can watch this video. In this video, “Sugi Guru” is using the NordVPN app to access the Netflix account.

He also mentioned in his video that in any chance, NordVPN doesn’t work in your country, then you can try ExpressVPN, which is another good alternative of NordVPN.

If you don’t know the working server list of NordVPN to access the Netflix account securely, you can connect to any of their servers, which is listed below.

We recommend you to use any of the below servers which are closest to you for faster and better speed.

If you’re still experiencing the issues accessing the Netflix account, you can do the following things to unblock geo-blocked content.

If you’re using Windows, Mac, or Linux, use this method…

If you’re using Android, iPhone, or Router, use this method…

The speed of my broadband plan is 50 MBPS, and normally I get around 40-45 MBPS browsing speed on Fast.com (a free speed testing service offered by Netflix), and once I connected with the NordVPN server, the average speed of my browsing is 33 MBPS which is good enough to stream online videos.

Trending
10 Best VPNs for Brasil (Tested and Tried by Experts)

The speed is enough to stream the television show or any Netflix content in Full HD. If you’re not getting speed after using the NordVPN app, check the server and try connecting to the server, which is closet to you.

There are numerous benefits of choosing the NordVPN to access the Netflix account. Here I’m sharing some of the key benefits of using this VPN that can’t be ignored.

If you ever try to open Netflix using a VPN service, they’ll show an error of “Whoops, Something went wrong” in your device. It is a common issue that appears when you’re browsing Netflix content using the VPN services.

When Netflix detects the range of VPN’s IP address, it will block access to its website to protect viewing content which isn’t available in your region.

If you’re traveling to some other region and then if Netflix is not showing your favorite content which is available in your area, you can use some popular VPN providers to unblock these restrictions.

These things happen when the content owner does not have separate licensing of the content for that region.

Can We Use Other VPN Providers to Unblock Netflix?

Yes, you can use any VPN provider that facilitates you to unblock these types of restrictions.

If you’re using some other VPN provider, then you have to remember that the VPN provider should have an extensive database of IP addresses and Servers because many low profile VPN providers can’t provide access to unblock geo-blocked restrictions.

In case you don’t want to use NordVPN, you can try using Express VPN and IPVanish to unblock these types of restrictions.

Yes, NordVPN can unblock Netflix only if you’re using the NordVPN servers we listed above.

Here we choose the NordVPN because it claimed to be the #1 VPN provider in the world and ranked #1 on our various VPN tests with blazing fast speed, encryption, zero-log policies, and for bypassing the block restrictions.

If you’re not sure about choosing the NordVPN provider, then you can use these steps to claim 30-days trial of NordVPN and unblock Netflix for free.

You can also try our IPVanish free trial to watch Netflix for free or you can save on NordVPN using our exclusive NordVPN coupon codes.

2 thoughts on “NordVPN for Netflix – Does NordVPN Works With Netflix?”

Your email address will not be published. Required fields are marked with *.